Taking 30BB to the Northeast: Guwahati – 3 bars stirring it up

There’s no point in starting a tale with a lie, so let me tell you right at the beginning: travelling to the Northeast isn’t easy. Firstly, non-stop flights to Guwahati are few and far between. Secondly, non-stop or connecting, the rest of the seven sister states of the northeast are primarily accessible via Guwahati. So, you can add anywhere between another five to 10 hours to your total travel time, depending on where you’re headed. Within the states, too, getting around can be a pain, with few options for public transport. But you know what they say — it’s all good after a couple of pegs. And thankfully, my recent trip to this corner of the country involved some (okay, quite a bit of) drinking.

In October, I set out for Guwahati, as part of an assignment for 30 Best Bars (30BB) — an initiative by Tulleeho and MW magazine to rank and celebrate the country’s best bars and bartenders — in a bid to identify some of the most exciting restaurants and watering holes there. And while the goal was certainly to identify establishments with evolved/intriguing/innovative bar programmes as part of our effort to make the 30BB community more inclusive and representative of the country, it was also in part, stemming from curiosity about what the drinking scene there looks like today.

Known for its verdant terroir, wildlife, waterfalls, lakes, mountain peaks, and tea gardens, Guwahati is a choice travel destination, primarily celebrated for nature and culture. And so, a thriving bar scene is hardly what I was looking forward to while booking my tickets. Though I now realise that it sounds a tad presumptuous. It’s not that I didn’t expect Guwahati to have bars, it’s just that I, in all my cosmopolitan temerity, expected them to have not much else beyond, well, cosmopolitans. And boy, did I enjoy being proven wrong.

I arrived in Guwahati via an early morning flight from Mumbai and between winks of sleep, caught glimpses of this oddly idyllic metropolis that’s home to temples, malls, and swathes of green in equal measure. My hunt for the best bars in the city began around lunchtime and ended with a late dinner. In that span, I hopped from a quaint cafe-like diner to a rooftop bar with truly elevated cocktails and a bistro-cum-brewery with dreamy interiors hidden inside a mall, where you’d hardly imagine it.

Through the course of my visit, I rediscovered Guwahati as an up-and-coming spot for drinking enthusiasts. Truth is, my cocktails (for the most part) came sans trimmings like ice spheres, dehydrated oranges, and never-heard-before bitters, and yet, I ended up having as much fun as I would at the new cocktail menu launch of a bar in tier-one cities. Here are the places I stopped by, ranked in order of preference: 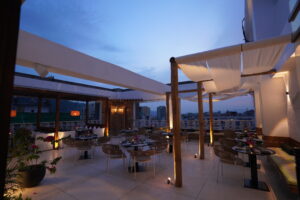 Located on the 6th floor of Anil Plaza, Terra Mayaa is a rooftop bar and lounge that’s dishing out innovative cocktails, alongside a global menu, spanning everything from calamari rings to chipotle murgh tikka. Their bar menu, though, is the highlight here, and it comprises fun shooters, well-rounded signature cocktails, and craft beers on tap; plus, a separate segment with coffee-laced concoctions. I tried their Citrus Grandis Paloma, a sprightly tequila-based mix that swaps the grapefruit — as you would find in a classic Paloma — with pomelo, or citrus grandis, that’s available aplenty in the northeast, particularly, in Mizoram. 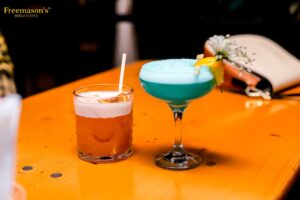 A sprawling space in Christian Basti’s City Center Mall, Freemason’s Brewworks is perhaps one of Guwahati’s chicest establishments, with multiple seating options, and a micro-brewery plant to boot. Of course, then follows their large selection of beers on tap, but I start with the Espresso Martini — a drink most bars feature, but very few get right. I was pleasantly surprised by a balanced version that wasn’t overtly creamy. The Thai Sour is a seemingly promising combo of vodka, kaffir lime, Thai ginger, pink grapefruit syrup, lime, and pineapple juice, but a tad too sweet for my liking. 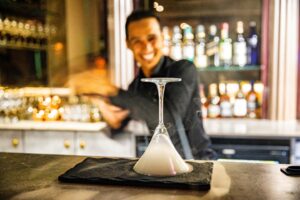 Piazza is where Guwahati’s college besties, work wives, and new couples converge. The casual dining space situated opposite RG Baruah Stadium is small and cosy, and yet, almost packed when I walk in for lunch. The European setting and succinct menu put me at ease, and I do take a liking to their Detroit-style square pizzas, too. However, the sunset on my tequila sunset — a sweet and diluted potion reminiscent of 2002, that I enjoyed (given the setting) but wouldn’t return for specifically. Is it one of the better options in the city, though? For sure.

Other Bars to Consider

Don't miss updates from us!